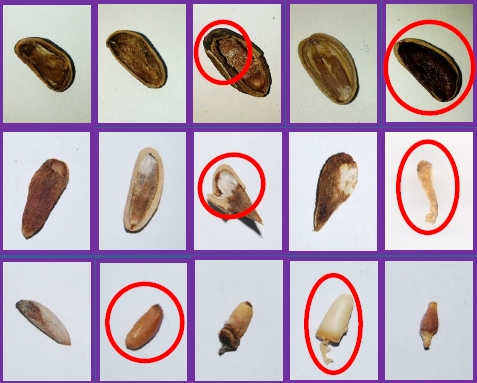 Mediterranean stone pine (Pinus pinea) cones constitute one of the most relevant NWFP collected in Mediterranean forests, providing high-value edible kernels. In the last decade, a severe decline in the kernel-per-cone yield has been reported over the whole Mediterranean range of the species, in parallel with the rapid expansion of an exotic invasive seed pest, the Western Conifer Seed Bug Leptoglossus occidentalis. Since its first accidental introduction into Italy, pine nut yields have dropped there by more than 80%. Pine cone pickers and processors express concerns about the damage caused by the insect, but little is known about the real effect of the pest on pine nut and kernel crops.

The aim of this work was to quantify the extent of the recent decline observed in pine nut and kernel production. For this purpose, we analysed data from the INIA long-term sample plot network for cone and pine nut production in the four main Spanish stone pine regions.  Data series for more than a hundred plots since the last century, previous to the arrival of the bug, were compared with the same series after its arrival. Hence, the collapse in kernel per cone yield since can be quantified, the implied main factors identified, and  the evidence of L. occidentalis causality implied analysed.

The kernel-per-cone yield decreased significantly in three of the four studied regions, by more than 50% in the most affected areas by . This was mainly due to a generalised drop in the kernel-per-nut yield (kg of kernels per kg of inshell pine nuts) caused by a higher percentage of damaged or empty pine nuts and, to a lesser extent, a lower number of developed pine nuts per cone.
The prevalence of this reduction in the kernel-per-cone yield over the years and in growing regions with contrasting climates supports the hypothesis of the main cause being  L. occidentalis, whose feeding produces this kind of damage, although the impact can be exacerbated in years with extreme drought.

Over the last decade, this pest has impacted pine nut production in all Mediterranean countries. This study confirms that due to the high percentage of empty seeds, the kernel-per-cone yield in the factory has dropped by half , often to below 2.5% of cone weight.
At the same time, massive conelet abortion due to bug feeding and severe droughts has led to scant harvests. Fierce competition between buyers and processors all over Europe has pushed the price of cones at the factory gate beyond 1 €/kg, regardless of the effective kernel yield. This is not reasonable and can only be explained by speculative re-sale operations and large cash sums moved by some actors in this sector.  More effective regulation of cone sale is necessary so that a fair price is paid for each lot of cones once pine nuts/kernels yield samplings has been conducted either at the factory gate, or previously.

The detailed results of the study revealed differences in the incidence of the pest between regions and years, possibly associated with population fluctuations. In the early years, in a situation "lacking natural enemies" typical for exotic invasive species, large groups of bugs were commonly observed. Their presence in the forest is currently much lower, or more elusive. Their initial over-abundance in the ecosystem may have led some species, whether an insectivorous bird, another arthropod, parasite, parasitoid, or a pathogen, to adapt and take advantage of the presence of L.occidentalis as an available food resource. However, this has not yet been confirmed by research.

Having evidenced the role of the bug in the kernel yield drop, it is now urgent to develop an effective integrated control system for this pest. The use of parasitoids shown to be effective against other pests, such as the release of Torymus sinensis against the chestnut gall wasp, is a priority line of research.
As regards the market, a gradual introduction of better standards in cone trading will come into place as a result also of the European legal requirements for traceability in food chains "from farm to fork", in this case "from forest to fork". 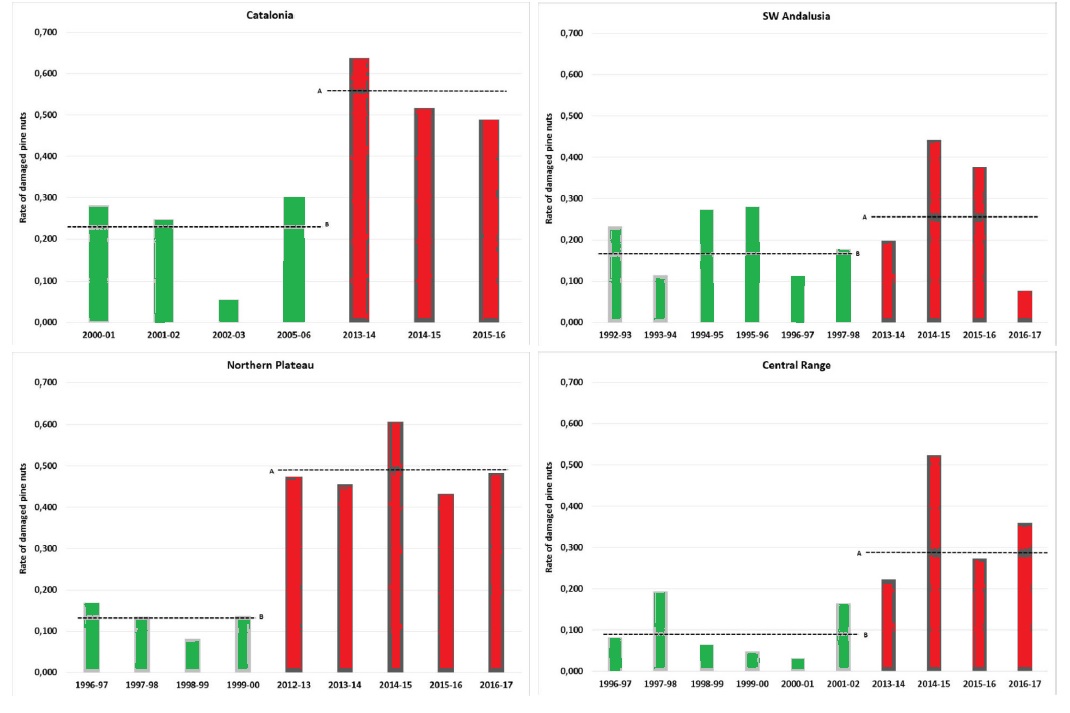 Annual values and averages of the percentage of empty pine nuts: B. before (green),  A. after Leptoglossus occidentalis arrival (red)   (c) R. Calama