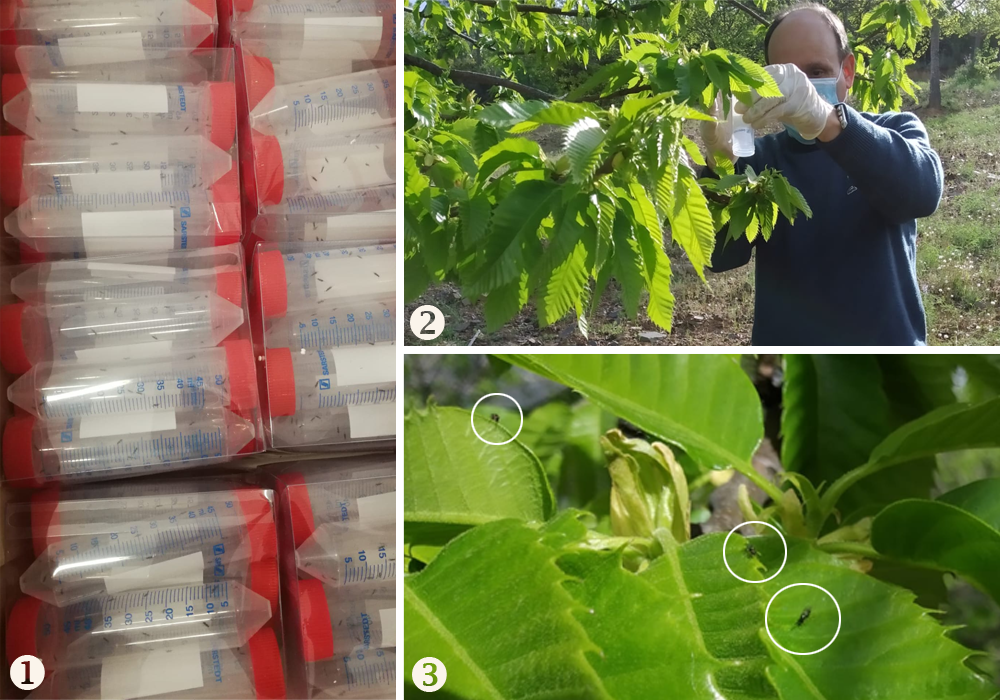 The chestnut gall wasp, by laying eggs on the buds, induces the appearance of galls on the branches and leaves, which appear the following spring, turning green to reddish. The growth of branches and fruiting is affected, decreasing the production of nuts. It is dispersed through adult females or circulation of infested plant material. The existing native parasitoids are insufficient to control wasp populations. The biological control is, therefore, an essential means of combat through the introduction of the parasitoid Torymus sinensis.

The Dryocosmus kuriphilus insect, chestnut gall wasp, introduced in Portugal in 2014, represents a serious threat to the national production of chestnuts. Over the years, various pest outbreaks have been identified, which is currently present in much of the Terra Fria Transmontana region, with levels of severe infestation levels. The official reports state, “We are currently witnessing a large and rapid dispersion of the insect and the alarm of the populations, given the damage it is already causing, so, an intensification of the parasitoid releases for these regions should be considered from 2020”.

This pest was detected in 2014 in Portugal and appeared in the Terra Fria region in 2015. A methodology for pest prospection, identification of outbreaks and execution of parasitoid releases was defined, with specific criteria - releases are made in the second quarter of each year; release of insects should be done in three to four trees with the presence of galls; and the distance between releases should be of at least 500 m for regions with a severe infestation (51-80% of buds with galls). There have already been done 36 releases in 2018 and 170 in 2019 in the Terra Fria. In Spring 2019, Torymus sinensis was found in 93.3% of the places where parasitoid releases were done in 2018 spring, with an average parasitism rate of 0.74%.

At the beginning of the gall wasp attack in the region, farmers were asked to identify affected trees and remove and burn the tissues with galls. With the introduction of biological control, this action is no longer recommended, and farmers must allow the parasitoid to establish itself, without intervening or, if necessary (by normal management actions like prunings), leave the galls in the orchard itself.
The fight has been carried out on a municipal scale, and it is essential to assess this problem territorially. It is a joint effort between various associations, private and public institutions, in an essential collaboration for the effective planning and execution of the work.

Farmers despair for solutions after witnessing the harm pests cause in some areas, thus being seduced to buy insects on the black market (other than the parasitoid in question) and get galls brought from other countries, thereby introducing other non-native insects. The entities involved must invest in good communication to inform the public of the consequences of these actions and the work carried out in the field.
Climatic variations can be another adversity. They may influence the development cycles of the gall wasp and the parasitoid, delaying or hindering the actions of parasitism.

Parasitoid releases are planned for the next three years as part of Rural Development Program projects. The most optimistic beliefs are that, in the meantime, a situation of ecological balance of pest-parasite can be reached, with the national production of chestnut being able to recover and stabilise.
Monitoring the parasitism rates will be vital. Eventually, branches with galls from significant parasitoid areas will be used in other places requiring reinforcement of biological control, thus reducing costs by acquiring Torymus sinensis insects from Italian companies. 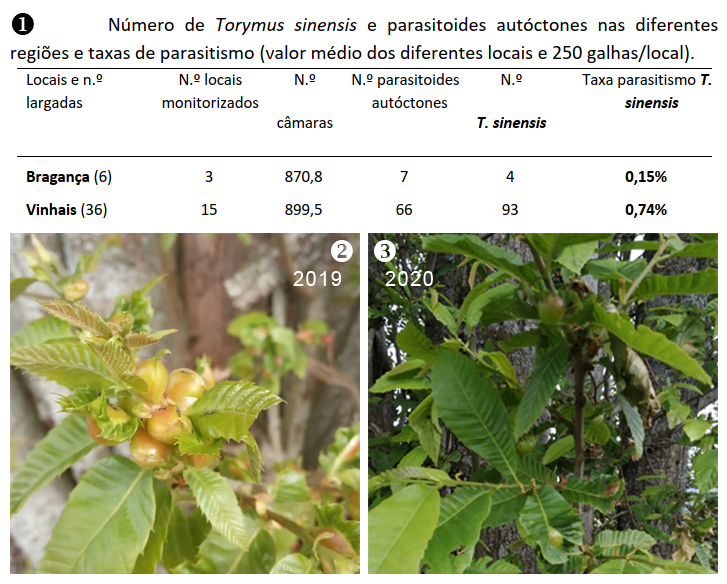