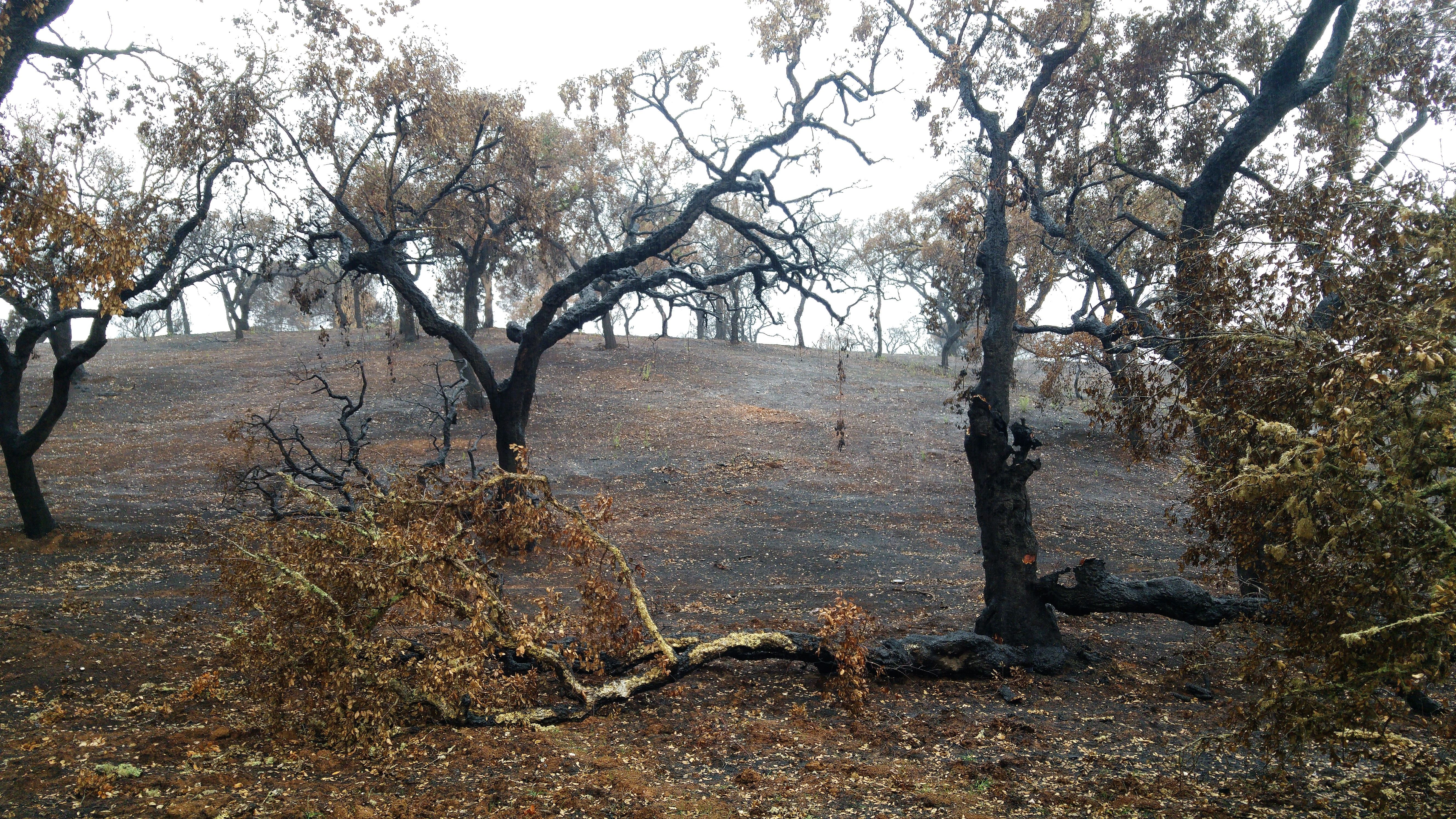 Cork oak ecosystems have great socio-economic and ecological importance in the Mediterranean Basin, but they have been increasingly affected by several factors, including wildfires. Wildfire impacts on cork oaks are highly variable, depending largely on cork thickness, but both surviving and dead burned trees may be attacked and colonized by wood boring insects (Coleoptera). Ambrosia beetles, which have symbiotic interaction with fungi, are a particular concern because they have been reported to attack apparently healthy trees and may constitute a threat to neighboring forest stands.

Cork oak ecosystems have been experiencing a serious decline in the last decades attributed to different causes, including wildfires. After fire trees may become particularly vulnerable to forest pests, which may further affect the vigor of surviving trees and give rise to massive dispersing offspring affecting surrounding areas, but this was rarely assessed in Mediterranean oak ecosystems. Thus, the objective of this study was to assess the presence and dynamics of xylophagous insects on cork oak forests following fire in central Portugal.

In the first spring after wildfire different types of insect traps were set up (interception, emergence and pheromone traps), and monitored for up to 16 months. Fire occurrence had a great impact on cork oak trees attractiveness to xylophagous insects, which increased significantly with increasing fire severity. Living unburned trees located close to the fire edge were clearly avoided, while burned trees with no regeneration were the most attractive. Four species of ambrosia beetles, represented nearly 90% of all xylophagous insects captured in interception and emergence traps, namely Platypus cylindrus (Platypodinae), Xyleborus monographus, Xyleborinus saxeseni and Xyleborus dryographus (Scolytinae).

The presence of ambrosia beetles in burned forests should be carefully assessed, and their control should focus on preventing colonization and the spread of infestation. Management should focus mainly on increasing tree vigor, and on reducing the factors that may increase burn severity. In the first years after a wildfire, it is advisable to avoid any activities that are likely to increase stress of burned and neighbouring unburned trees, such as cork extraction, branch pruning and soil ploughing. Additionally, post-fire logging and removal of dead trees, and the use of pheromone traps, are other possible measures to reduce the number of beetles in these situations.

Ambrosia beetles are a concern because they are considered the major insect pests which are able to attack and kill adult cork oak trees. Additionally, insecticides and fungicides are ineffective against ambrosia beetles and the fungi they transport (once they are inside the trees), thus, beetle control need to focus on prevention. The best defense to avoid pest attacks and their negative impacts is to keep the trees as healthy as possible.

This study showed that pheromone traps allow capturing large numbers of P. cylindrus, but more research is needed to assess if this is an effective method to significantly reduce ambrosia beetle populations. Results also suggested a genetic differentiation of the Portuguese populations of X. monographus from those of central Europe, thus, further investigations should be carried out to assess that possibility. The knowledge about the ecology of the Xyleborini species in the Mediterranean is still very scarce and clearly need to be improved. 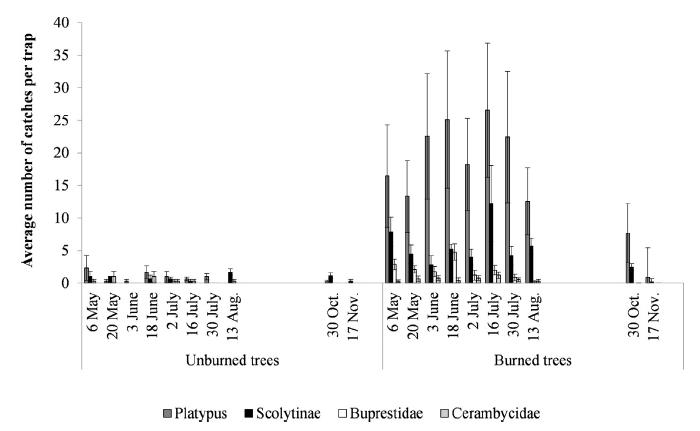 Post-fire average catches per interception trap in burned and unburned trees, from May to November 2014, with a collection hiatus between mid-August and mid-October (Catry et al. 2017)