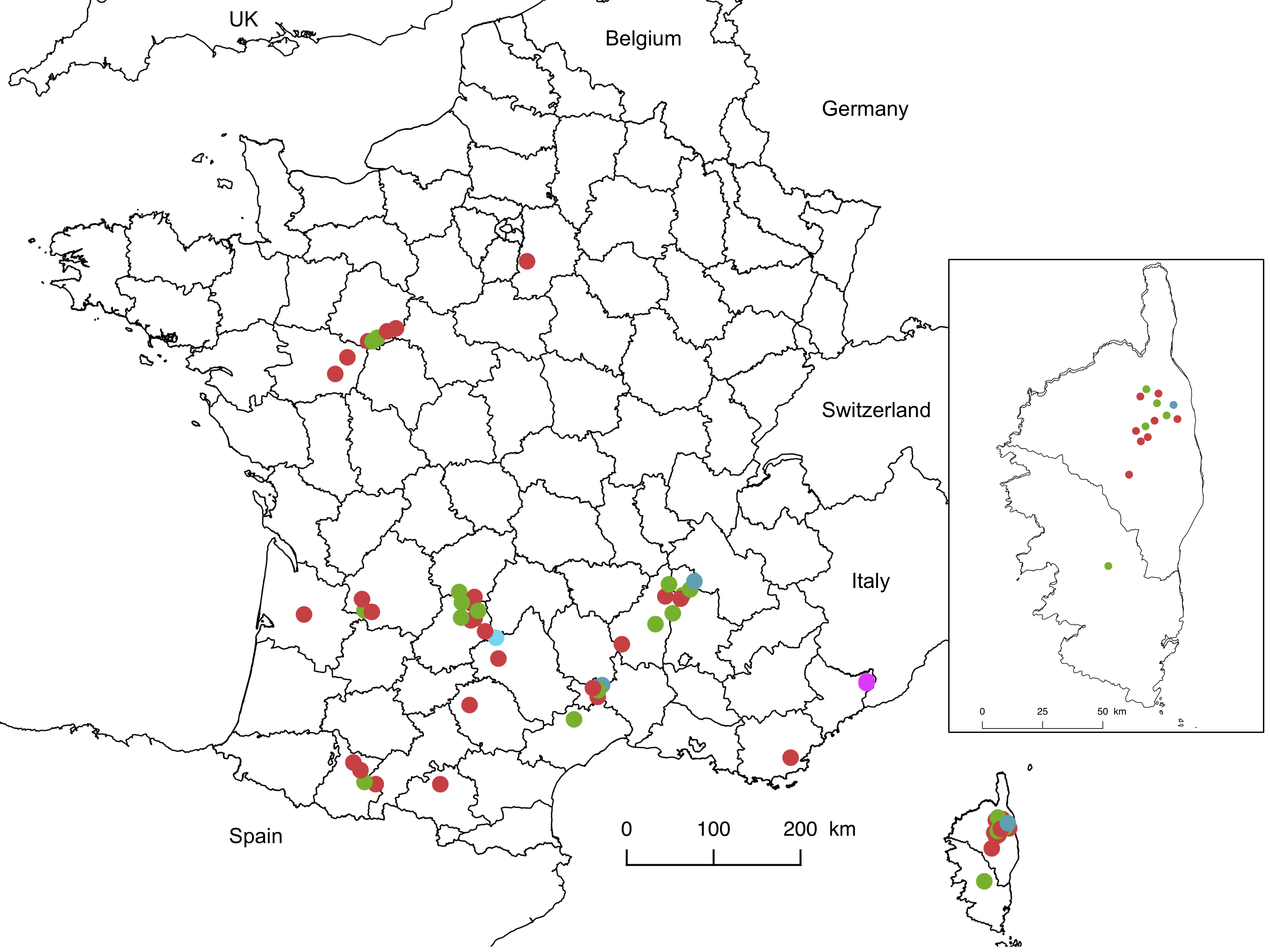 The chesnut gall wasp (Dk) was firstly reported in Japan in the 1940s where it led to a decrease of chestnut production up to 80%. With 1 million hectares located in France, C. sativa is very important for economic, environmental or landscape purposes. Dk was reported in 2010 in several areas of chestnut production in France. To optimize and coordinate actions to fight this invasion, a national committee was created to:

The objective of the project was to implement in France a classical biological program against the chestnut gall wasp, Dryocosmus kuriphilus (Dk), using releases of the exotic parasitoid Torymus sinensis. The expected outcome of this project were (i) the permanent establishment of the parasitoid and (ii) an efficient and long-term control of the pest.

Between 2011 and 2015, experimental releases of TS were done on 58 sites in France. Releases were done using several modalities of introduction in order to optimize the biological control against Dk. Following 7 years of post-release surveys, results showed a first exponential growth rate of TS populations with no effect of the modality of introduction during the 4 first years after releases, followed by a decrease of both TS and Dk populations.
Moreover, we also observed a positive effect of the connectivity of the site (presence of oak-chestnut natural stands in the surroundings) on TS population size. This suggests a successful establishment and colonization at a wide spatial scale beyond the introduction sites.

The classical biological control in France showed that TS is an efficient biocontrol agent, with a highly active dispersal. Indeed, this parasitoid naturally colonized control sites (i.e. without releases) very quickly. Knowing this dispersal ability, the main recommendation for massive releases was to release small numbers (i.e. 100 females) of TS every 5km.
Control of Dk was achieved around 6-7 years after first releases implemented in France, with levels of chestnut production back to its initial level 6-7 years after first releases.

The levels of control seems depend upon chestnut variety as well as pedoclimatic conditions. In Corsica for example, infestations of Dk are still high, even if a decrease if observed since 2 years.
Due to the impact of Dk on chestnut production, massive redistributions of TS have been implemented by growers only 4 years after the first experimental releases, and thus before the demonstration of the efficiency of TS. This highlights the difficulty to find a good balance between scientific and agronomic aims.

Since high decrease of Dk populations is observed in most areas of chestnut production, no new release of TS is planned, except in areas of honey production. From a scientific aim, we are still analyzing data collected during the 8 years post-release survey: dynamics of TS and native communities, assess the genetic diversity of TS, document potential unintentional effects (hybridization of TS with native Torymus, attack of non-target species of oak cynipid, etc.).