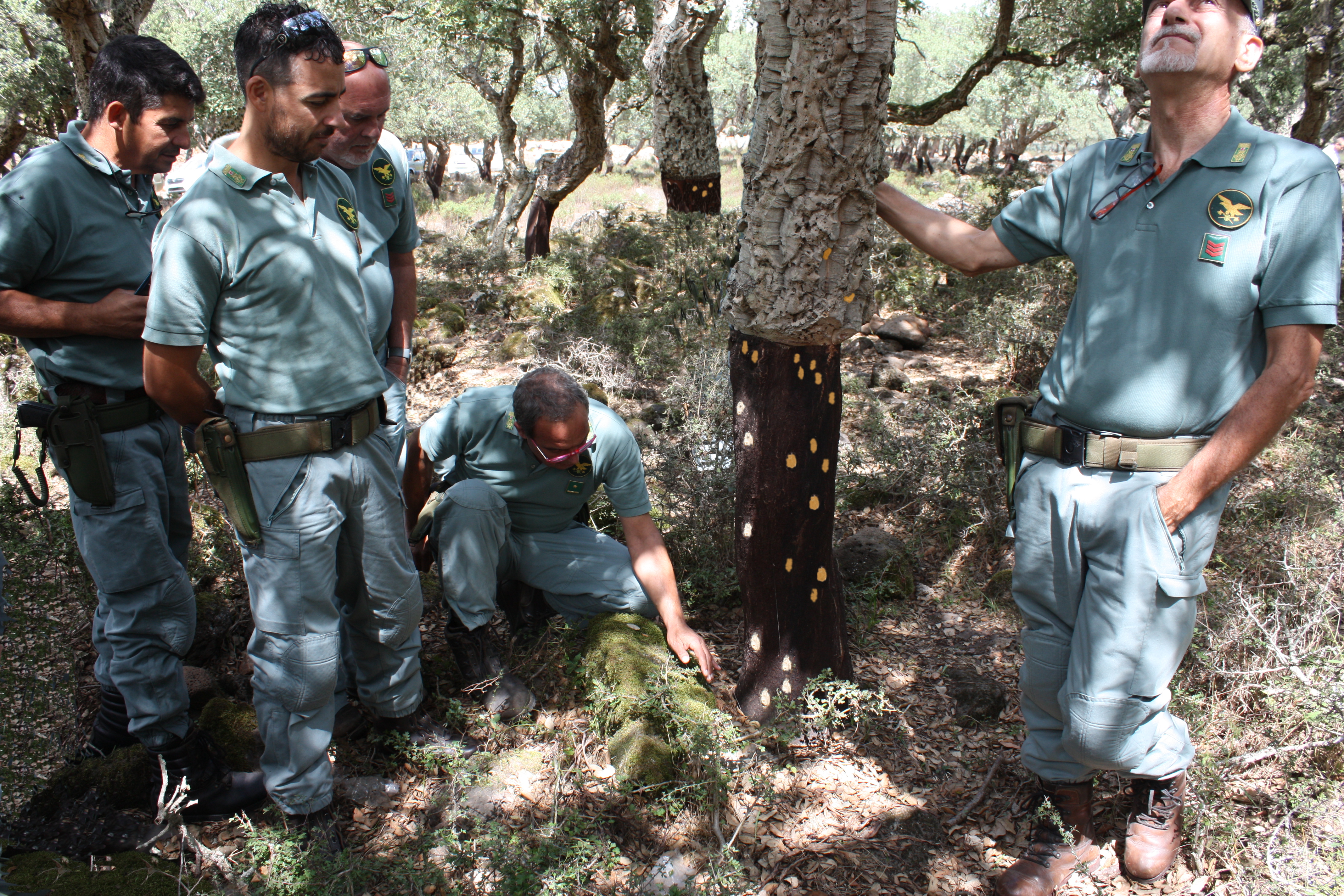 Cork oak woodlands in Sardinia are subjected to periodic infestations by lepidopteran defoliators, in particular Lymantria dispar (gypsy moth), whose attacks determine a reduction in plant vigour and cork, wood and acorn production. Monitoring allows to predict the areas at risk of defoliation, as well as to study population dynamics of the defoliator. The population density of the defoliator is estimated by counting the egg masses in more than 680 permanent monitoring sites distributed throughout the regional territory (Di.Bo.Med Network).

The aim is to monitor the population densities of the lepidopteran defoliator Lymantria dispar in Sardinian oak woodlands. This is done through  egg mass counts with the aim of predicting the areas at risk of defoliation and plan insecticide applications accordingly.

Monitoring egg masses allows us to verify the frequency of defoliations by Lymantria dispar in the different wooded areas of Sardinia, highlighting greater damage levels in more simplified ecosystems. Knowledge of the periodicity of infestations is essential in planning forest defence interventions. Monitoring is essential to implement risk maps for defining the areas at risk of defoliation precisely. The latter is fundamental for the Italian Ministry of Health to authorize aerial treatments with microbiological formulas as an emergency procedure. The monitoring network has made it possible to plan the control of lepidopteran defoliators on over 200,000 hectares of cork oak forests in the last two decades. Insecticide applications are carried out with aerial treatments where population densities exceed the threshold of 100 egg masses per site.

The sampling protocol foresees egg mass counts on 40 plants for each site: 10 plants for each cardinal direction starting from a common central point. In the last year, a new protocol entails a simple annotation of the plants with the presence of egg masses and a calculation of the percentage of infested plants.
It is essential that personnel detecting the egg masses can distinguish between egg masses of the year compared to those laid in previous years. In addition, it is necessary to note down the height of the plant where the egg mass has been laid and the average number of eggs per egg mass. These additional elements are indicators for determining whether the population of Lymantria dispar is growing or declining.

Egg mass counts allow us to predict the degree of larval infestation in the following spring right from the month of September, allowing planning of any control intervention well in advance. The network is managed by the Corpo Forestale e di Vigilanza Ambientale (Forestry and Environmental Guards of Sardinia), which has units spread throughout the territory of Sardinia and therefore with personnel with a deep knowledge of the area.
Not all personnel involved in monitoring has received adequate training and sometimes inaccurate data can be provided, which determines reiterating surveys. Continuous training is therefore required.

In order to speed up observations in the field, the University of Sassari is defining models that allow us to establish damage thresholds exceedance by sampling fewer plants than the protocol used so far. An application for mobile devices is also being developed, which will allow us to record georeferenced sampling data and send it in real time to a processing centre which, with specific programs, automatically defines the areas at risk of infestation. 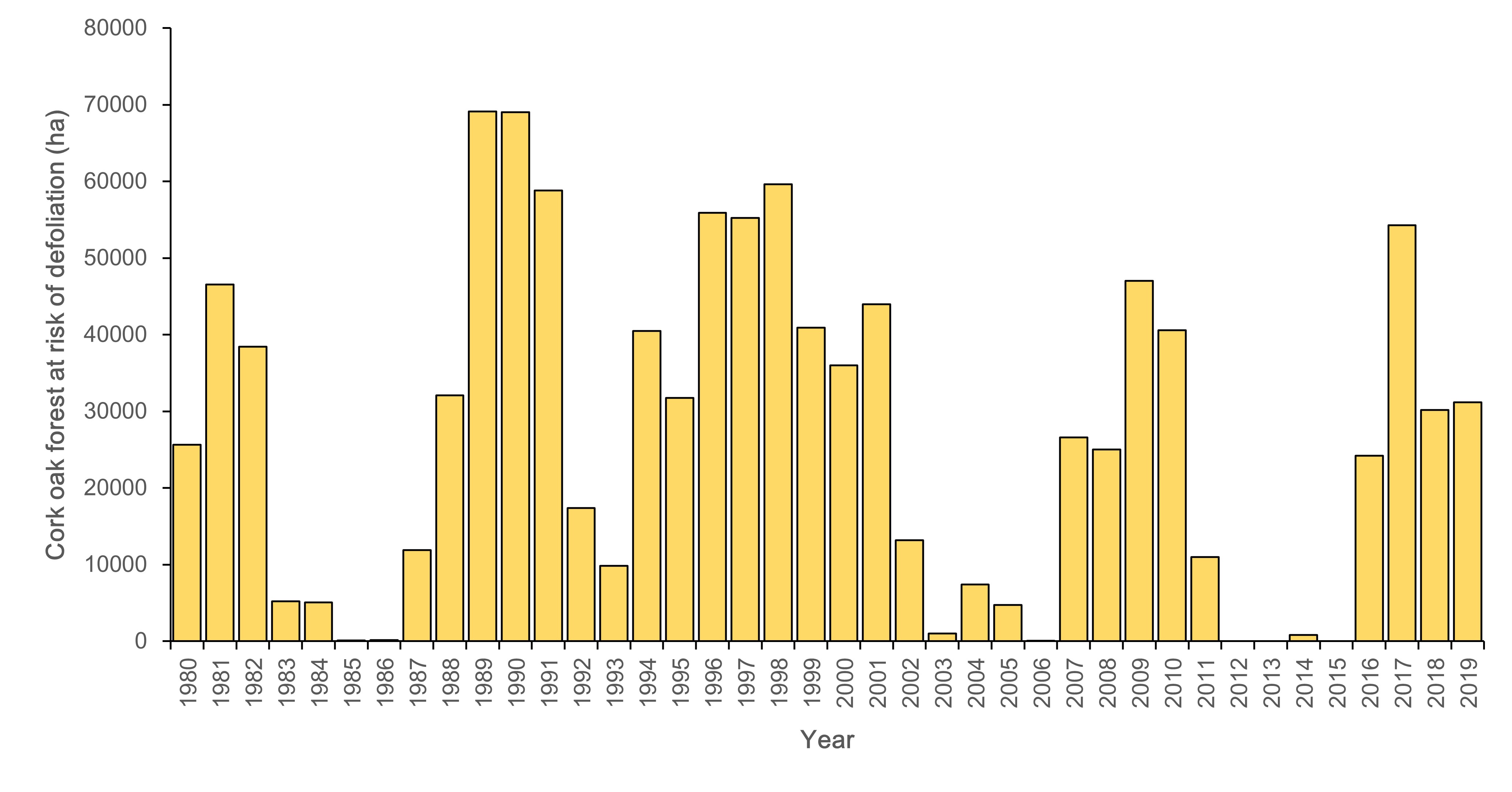 Estimation of areas at risk of defoliation from 1980 to 2018 based on egg mass monitoring (R. Mannu)