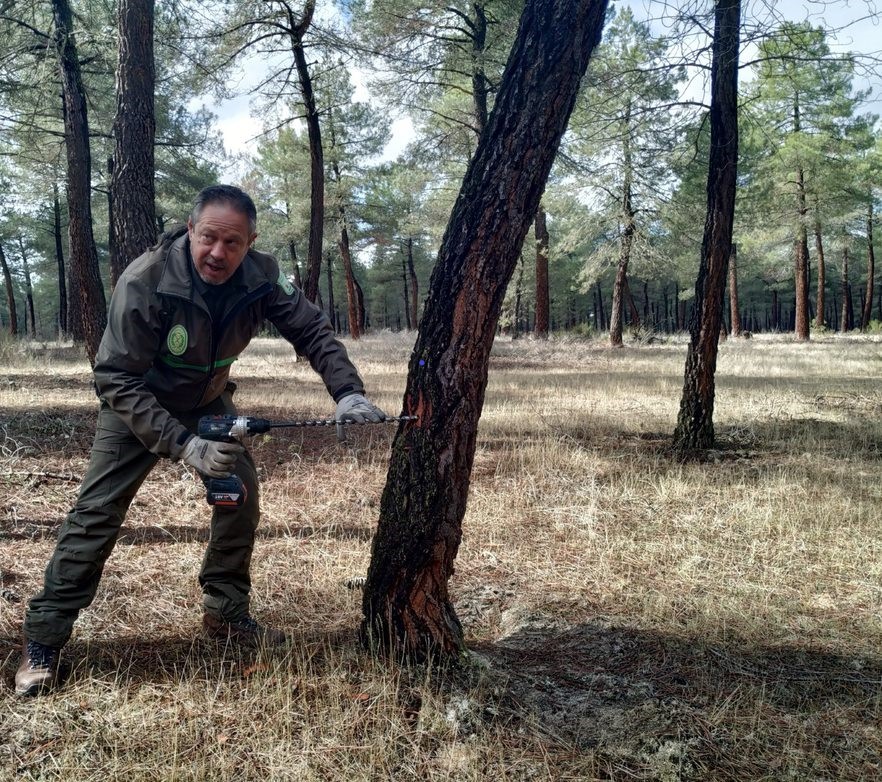 Due to the recent boom in resin tapping, initiatives have emerged from different research centres and public administrations to make this activity more profitable and therefore sustainable over time, enabling the development of a stable, robust resin sector in Spain. Among these initiatives two large groups can be distinguished: those that seek to increase the productivity of forest stands through genetic improvement programs and those that seek to improve resin extraction operations using new techniques or stimulants. Regarding the latter, experiments are being conducted in the UPM and INIA to test the effectiveness of a drilling technique for resin extraction, consisting of making a hole with a drill bit instead of the traditional bark stripping method.

The traditional method of resin tapping is a very time-consuming activity since it requires the resin tapper to visit each tree every 10 to 15 days during the season. In order to develop more efficient methodologies, the results of the first experiments carried out using the new drilling technique are presented.

The experiments carried out analyzed resin production based on the number of drill holes in each tree. Trials were conducted comparing the traditional method (bark stripping method) with the drilling method (1, 2 or 3 drill holes per season) in 2 different forests (Coca and Aldeanueva). The results revealed no significant statistical differences between the drilling method and the traditional method when 3 drill holes were made per season (June, July and August), with lower production in the rest of the cases tested (1 and 2 drill holes). However, the number of holes should be increased to determine the optimum number. As regards the drilling technique, the results show that more resin is obtained from holes made in the tangential direction than in in the radial direction. A methodology is also being developed that allows resin tapping to be standardized and made easier (angulometric framing square).

The drilling technique has shown promising results, although more research is still needed to determine the optimal number of drill holes. However, considering the number of operations to be carried out over the season, the use of this technique with 3 drill holes would already allow a greater number of trees to be tapped per season in comparison with the traditional method. As regards the holes, it is recommended that the first one be made 40 cm from the ground, and the others every 20 cm in order to avoid the burnt effect t caused by the sulphuric paste employed to induce resination. The drill hole should have a Southeast exposure, a depth of 12 cm, and diameter of 1.6 cm.

The drilling technique can make resin tapping easier since it reduces the number of times the operator has to visit each tree and thus allows them to cover a greater number of trees per season. This would allow the resin tappers to perform fewer operations to obtain a similar amount of resin, and to cover a larger number of trees per season. In addition, the operations to be performed would require less physical effort, although they would take a little longer. Finally, the resin would be collected in airtight containers, thus reducing the loss of the volatile fraction that currently evaporates and prevent contamination with impurities such as pine remains, insects, etc.

The results shown are preliminary and therefore it is necessary to continue this line of research. Among the aspects that should be developed in greater depth would be to determine the optimal number of drill holes per season which would allow the number of operations carried out on the tree to be minimized while maximizing the profitability of the resin tapping. In addition, the experiment should be extended to other areas to verify the validity of the results. 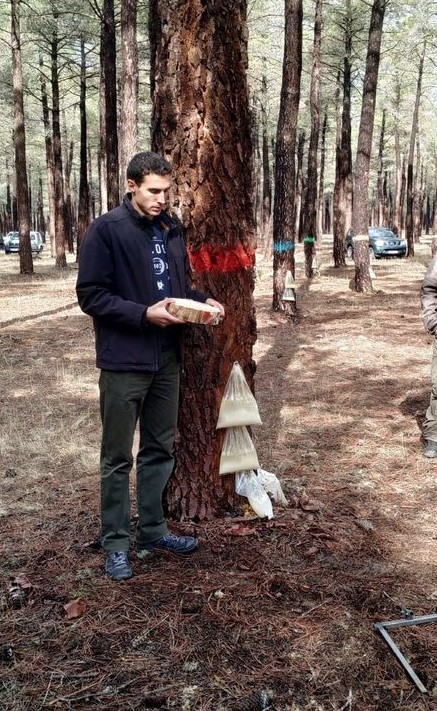