Study of antimicrobial activity of pine resin in Tunisia

Resin is a natural product with multiple applications and a great demand in the chemical industry. The exploitation of the abundant pine resin in Tunisian forests could contribute to bio-economy and generate additional income for forest populations. Until now, the traditional know-how of tapping was very limited in Tunisia. Therefore, the present work was an exploratory study aiming to develop knowledge and best practices of tapping techniques. These could contribute to the promotion of the best performances of the antimicrobial activities of Pine in Tunisia which could be a great importance.

The wide potential of resin acids as bioactive agents could be considered as very promoting products for new applications of the natural forms and their derivatives.
The objective of the present investigation was mainly focused on the assessment of the biological performance of the resin. Therefore, the evaluation of the antibacterial activity of the three Tunisian pine species Pinus pinaster, Pinus pinea, and Pinus halepensis were conducted in order to control four pathogenic bacteria species.

The antibacterial activity of resin was mainly evaluated by the WELL method, in the presence of four pathogenic bacteria species: Escherichia coli, Bacillus subtilis, Listeria monocytogene and Salmonella enterica. The pure resins revealed a significant antibacterial activity similar to the reference antibiotic Gentamicin. In addition, the antibacterial activity of the ethanolic resin extract was measured in terms of the diameter of the “halo”, formed as a consequence of the microbial growth inhibition produced by the antimicrobial material disk. This reduction was induced by the Pinus pinea with the largest mean inhibition diameter (2.38cm) compared to the Pinus pinaster with the lowest inhibition diameter (1.68cm).

The listeria strain (Gram+) and the Bacillus strain (Gram+) were more sensitive than the E. coli (Gram-) and Salmonella (Gram-) strain under the action of the resin tested. Indeed, the activity of tested resin was probably due to the majority compounds (caryophyllene, limonene and pinene) (Abi-ayad et al., 2011).
Antibacterial activity seems to result from a combination of several modes of action, implying different cellular targets. However, the results of this work indicated that this essence could be intended for commercial use as a preventive agent against different types of strains of bacteria and fungus.

The antibacterial activity of oils and plant extracts has been the basis of many applications, including the preservation of raw and processed foods, pharmaceuticals, alternative medicines and natural therapies (Reynolds 1996; Lis - Balchin & Deans 1996). However, the antimicrobial activity of the resin could be also influenced by plant families, the harvest period, and the region (Hussain, 2009).

These results could be considered as a first step in the research of the microbial activity of the three pine species. Additional studies and methods are needed to provide more details about the mode of action on the bacterial strains. In this context, this work would be more improved by the research of other molecules at the origin of this antimicrobial property of resin extraction using gas chromatography. Furthermore, these results have suggested that Pinus Pinea would be a potential source as a natural antimicrobial applied in the pharmaceutical and food industries. 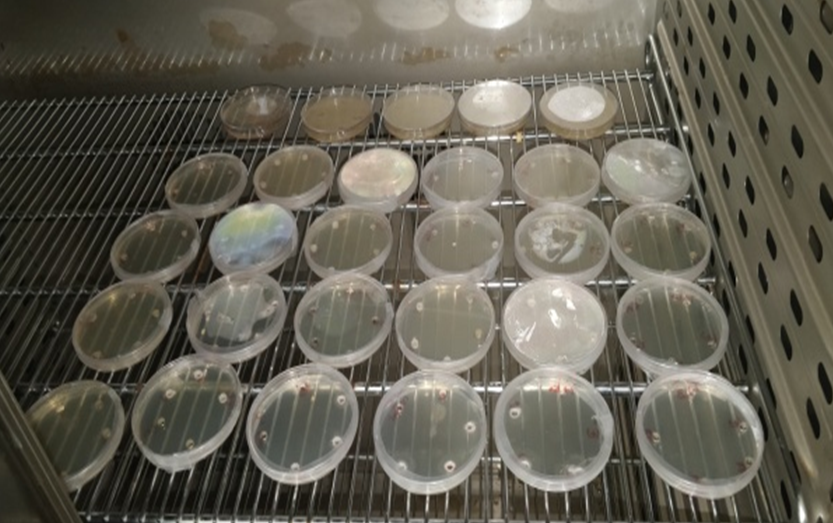