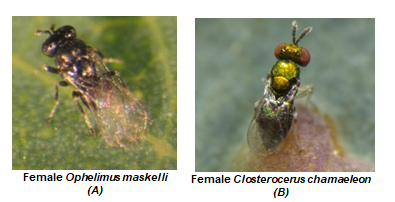 The gall wasp O. maskelli (Fig 1.A), invaded several regions outside its native range in Australia. It was mainly recorded in the Mediterranean basin. Record in Tunisia was in 2006. It induces circular, swollen galls which are very noticeable on eucalyptus leaves. In 2007, the Australian parasitoid C. chamaeleon (Fig 1.B) was detected in Tunisia and its parasitism rate was low (5%). In this work we evaluated the indirect effect of this parasitoid on the host range of O. maskelli in four arboreta, Choucha, Zerniza, Korbous and Jbel Abderrahmane.

Among essential oils, Eucalyptus oil, is one of the most useful as it is easily extractable commercially (industrial value) and possesses a wide range of desirable properties worth exploiting for pest management. Eucalyptus oils are mainly extracted from leaves which can be attacked by gall wasps as Ophelimus maskelli. Induced galls can affect the essential oil production.
This work aims to determine the role of the parasitoid Closterocerus chamaeleon in the biological control of its host O. maskelli.

Outbreaks of gall wasps, Ophelimus maskelli, is controlled by its natural enemy. In fact, before establishment of its parasitoid Closterocerus chamaeleon, O. maskelli increased dramatically its population and its damage affected 18 Eucalyptus species in Tunisian forests. After parasitoid establishment, host range narrowed down by 83% and only 3 species are susceptible to the gall wasp attack:  E. camaldulensis, E. rudis and E. tereticornis all in the section exertaria, series Exertae (Fig. 2.A). The intensity of galled leaves of these three species decreased after the establishment of this biological control agent (Fig 2.B).

Several Eucalyptus species are introduced in Tunisia and many of them showed a great importance in beekeeping and essential oil production. For successful plantings, it is of great importance to study both the productivity of Eucalyptus species in flowers (nectar) and essential oils, their climatic and edaphic adaptation and their resistance or tolerance to insect attack. Biological control by parasitoids is one of  many management tools of insect pests. The biological balance between O. maskelli and its parasitoid C. chamaeleon is established in Tunisia. Maintaining this balance depends on the choice of species that are resistant to the insect pest.

Despite the collaboration between INRGREF researchers and foresters, the detection of forest pests, mainly exotic pests, is only possible after the damage caused on host trees. There is a lack of surveillance at the level of the principles for entry of goods mainly at the level of the ports.
To apply the biological control by the breeding of this insect parasitoid and its release in the field to regulate pest population remains very expensive.

Production of clones well acclimated to their environment and tolerant for insect pests.
The rearing of parasitoids and their release into the forest environment is an effective alternative in the biological control of insect pests, mainly during their strong outbreak. Other tools to be developed in Tunisian forests; biological control by entomopathogenic fungi and  pheromone trapping. 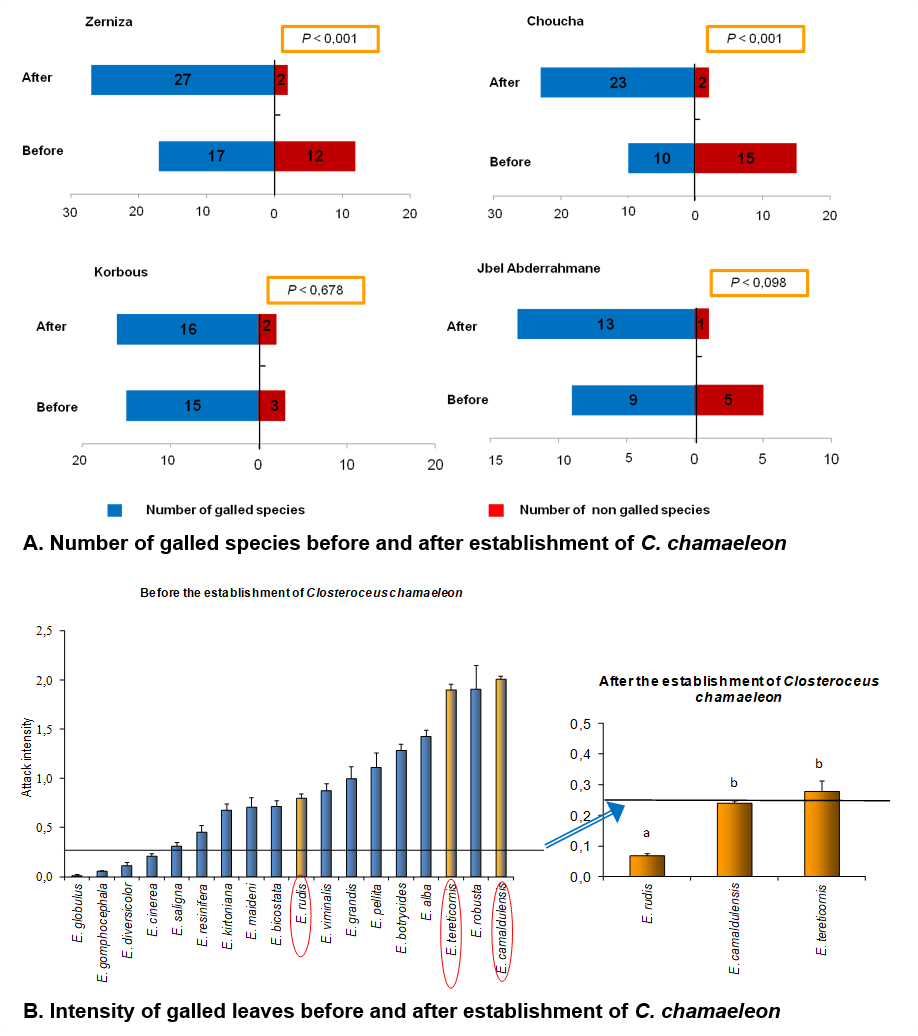