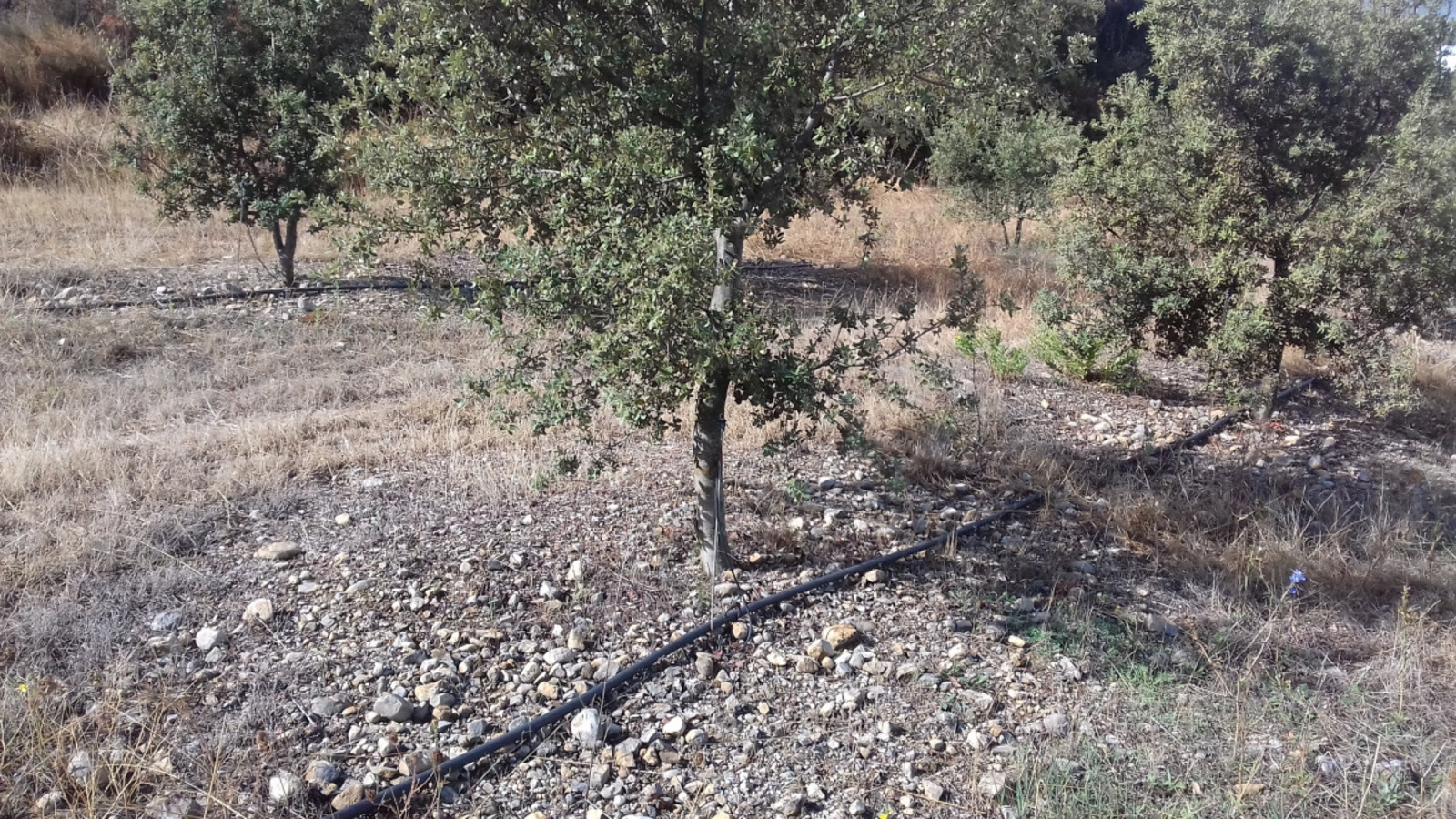 The truffle plant was installed between 1960 and 1962 in a former vineyard. It was therefore between 17 and 19 at the study was carried out. It consists of pubescent oaks mixed with some green oaks. It is located at an altitude of 200m and the annual rainfall is 759 mm, with a very strong summer deficit. The soil characteristics are very favorable to truffle production. Some areas of the truffle were irrigated, mulched and fertilized with phosphorus and nitrogen. Phosphorus was supplied at a rate of 200 kg per hectare as a 45% triple superphosphate, nitrogen at 100 kg as a 33% ammonitrate.The truffle harvest was then done during two consecutive seasons and individualized by zone in number of carpophores and fresh weight.

The environmental factors that play a role in the fructification of black truffle are well known. In particular, low water availability during summer period inhibits fruiting. These elements result from observations and tests under controlled conditions. At the time of the study (late 1970s), there was no field trial to determine experimentally the influence of environmental factors in cultivated truffle conditions. A trial on a truffle farm located in south-eastern France was therefore set up in 1979 to clarify the influence of soil fertility and moisture levels on Black truffle fructification.

The effect of soil moisture improvement appears very clearly through this experiment. Indeed, a water intake of about 100 mm during summer allows an increased production of truffles. Without irrigation, mulching has a very clear effect on the evolution of the water profile. Mulching slows actually the evaporation of the soil. Nevertheless, mulching does not always have a beneficial effect on the soil moisture content as it partially stops the rains. On the other hand, mulching associated with controlled irrigation, as practiced in this experiment, makes it possible to obtain an optimum water regime. Fertilization seems not to have any effect on truffle production.

Knowing the results that were obtained in this experiment, it seems that fertilization as practiced has no effect either on the number of trees carrying truffles, nor on the number of truffles per tree, nor on the weight of truffles per tree. However, it is necessary to wait several years to observe the effect of fertilization. Indeed, the reactions of the tree are slow and it is not impossible that the effects of fertilization appear after several years, first on the host and then on the symbiont. In addition, irrigation as practiced in the experiment was probably insufficient, although it prevented the soil from reaching the wilting point in the first few centimeters. The intensity and/or frequency of watering should probably be increased, in combination with mulching.

If we knew that the soil regime is very important, we did not have the extent of its effects until this controlled experiment. The results of this trial show that a favorable water regime is absolutely essential during the summer season to ensure proper initiation of the carpophores.
However, an important limit of the study is that the number of producing trees in the truffle is very low. Over the two years of monitoring, only 22 out of 300 trees produced truffles, which triggers serious statistical interpretation problems.

This study opened new perspectives in terms of optimizing fertilization, irrigation and mulching in truffle plants. It subsequently led to other projects, including ClimaTruf and CulturTruf, both directed by INRA.