Delineation of seed collection zones based on environmental and genetic characteristics for Quercus suber L. in Sardinia, Italy

The Region of Provenance (RoP) for a species is the area or group of areas subject to sufficiently uniform ecological conditions in which stands or seed sources show similar phenotypic or genetic characters, taking into account altitudinal boundaries where appropriate. However, the delineation of RoPs is usually based on the overall estimates of climate homogeneity, but integrating genetic data into RoP maps is important to obtain a valid base for the legislation compliance and displacement of forest reproductive materials from collection sites to plantation sites.

The main objective of the study is assessing the areas where Quercus suber (cork oak) seeds (acorns) should be collected, taking into account both environmental and genetic variables, identifying uniform climatic areas and investigating the genetic diversity among populations at the regional scale. Combining the two factors, areas of interest for valorising the available germplasm can be identified.

Four spatial clusters were identified based on environmental data. The North and North-eastern part of the island was included in the Northern RoP. The second RoP covered the western part, and the third RoP enclosed the South-eastern region. The last group was distributed on the central part of the island (Central RoP) and included the higher elevations.
Afterwards, four Priority Areas were identified, which consist of the minimum number of sites needed to include all the genetic diversity estimated by genetic analyses. The prioritised areas covered three out of the four RoPs, encompassing almost the entire set of variability present on the island, even that detected in a minority of cases specific at a local scale.

These indications can be useful because these selected sites can be proposed as stands for seed collection for future plantations. Prioritizing population collections using environmental and/or geographic distance data, together with genetic elements, can optimize the captured variation, likely increasing the adaptive and functional genetic potential.
According to the Council Directive 1999/105/CE, this kind of characterization poses the bases to candidate the selected stands as “Source-identified”, being located in a single Region of Provenance. Moreover, when combined with phenotypic characterization, this approach may lead to their upgrading as sources of forest reproductive material in the category “Selected”, which represents the following step with respect to “Source-identified”.

Efforts to investigate functional responses to biotic and abiotic stresses are necessary. This requires building-up common gardens and provenance trials to test for phenotypic differences among populations from different populations and provenances, free of the responses’ variability induced by the different climatic conditions. These traits should include growth, tree architecture and development, physiological characteristics, health and resistance to attacks by damaging organisms. 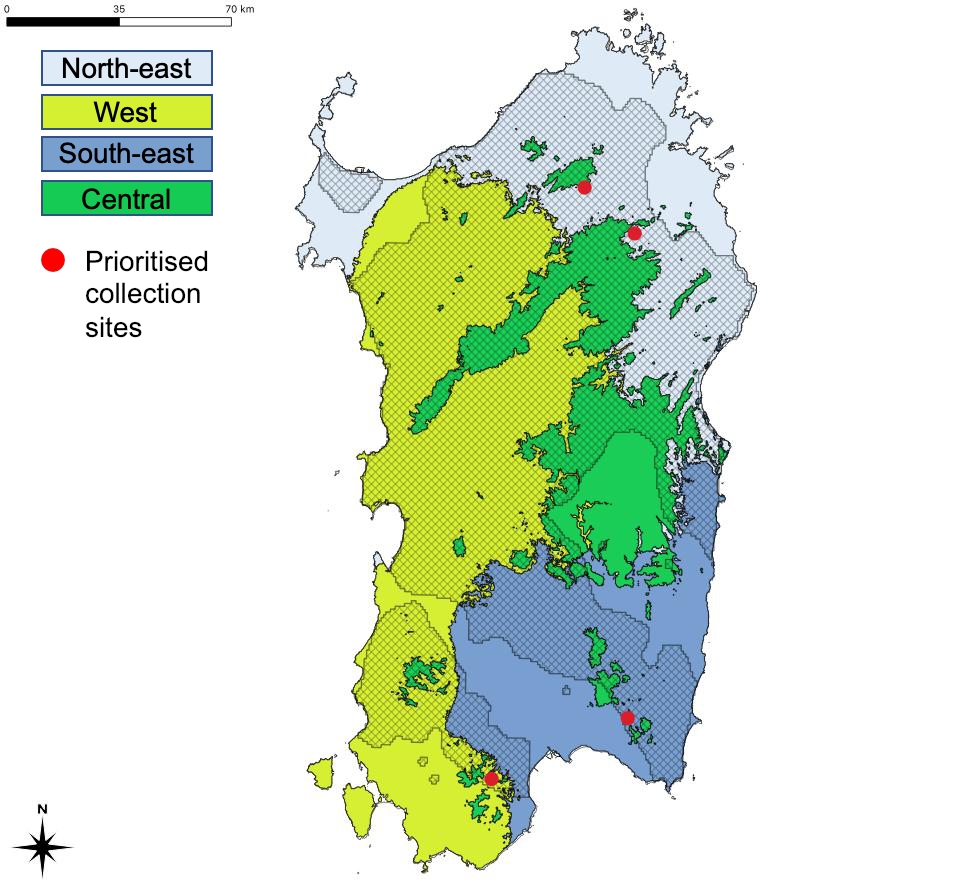 The regions of provenance and seed collection zones based on climatic and genetic variables. The shaded area represents the distribution range of Q. suber (M. Marchi, G. de Dato)