Analysis of prescribed burning as a tool to increase resin yield 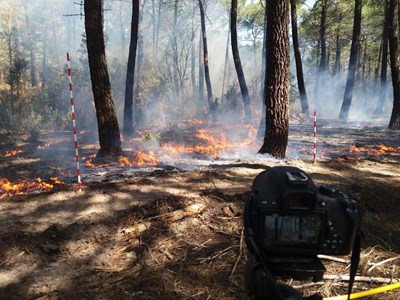 The defence system of pines involves different mechanisms. Some of them occur naturally and others are induced by external stimuli. In the resin tapping process, the wound produced in the tree plus the application of the stimulant paste (sulphur-based paste) cause a stress situation that induces resin production. The resin yield varies according to stress levels. Previous studies have reported that prescribed fires may affect resin yield. It is also known that stands with lower densities produce more resin, so the reduction in competition caused by prescribed fires may increase resin yield. This study aims to determine whether prescribed fires have a positive effect on resin yield.

Along with the latest advances in the resin sector for improving resin production, such as forest tree breeding, innovative harvesting technology, etc, prescribed fire is also analysed as a tool for increasing resin yield in Pinus pinaster stands. The results of this study are summarized below.

Prescribed burnings were conducted in April 2015 in two plots, with two others as control plots. Resin tapping was carried out in one of the burned plots and one of the control plots. The production was measured over two seasons (2015, 2016). The results revealed significant differences in resin yield between the two years considered, although no significant differences were found between burned and unburned trees. According to the results, low intensity prescribed burning does not cause significant anatomical changes. However, when combined with tapping, the induction of defence structures is favoured. The effect of the creation of these new structures was not reflected in resin yield at the time the analysis was performed.

Since low intensity prescribed burning did not lead to significant anatomical changes in the studied plots, it cannot be recommended as a tool for increasing resin yield until further research has been conducted. However, the use of prescribed fire is of interest as a silvicultural treatment since it reduces wild-fire risk and increases trafficability for resin tappers in the stand, thus increasing the efficiency of resin tapping.

This type of study allows us to further our knowledge on the mechanisms that can influence resin yield as a result of stress-induced anatomical modifications. Although no definitive conclusions can be drawn from the study, the findings are promising: anatomical analysis revealed that the combined effect of tapping and prescribed burning favours the creation of defence structures, although this had no effect on resin yield at the time the analysis took place. Further research is needed to confirm these findings.

It would be of interest to continue this line of research in order to confirm the results obtained in this study. Different fire intensities need to be tested in order to analyse the effect of burning on resin yield. Moreover, a medium-term analysis (resin tapping over a 2-5 year period following prescribed burning) would be helpful to determine whether the anatomical modifications caused by fire result in improved resin yield. 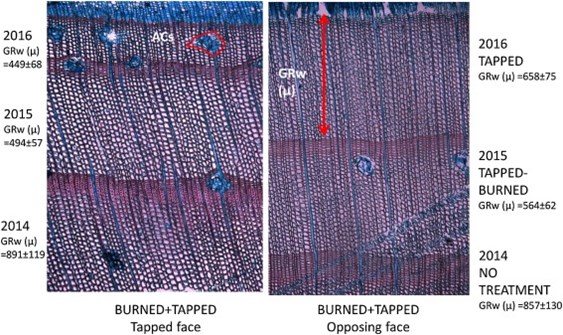 Cross section of xylem tissue of a burned+tapped tree in the tapped face and the opposing face. (c) Rodríguez-García et al. 2018